I’m not talking about your day job, although you probably should do that work if you want a paycheck at the end of the week and a fridge full of brewskis on Friday night.  I’m talking about your art, your craft, or whatever it is you’re passionate about.  I recently had the pleasure of presenting at the Canadian Association for Photographic Art’s biannual conference held in Fredericton, NB.  It was a great experience, super motivating and definitely went a long way toward replenishing my proverbial cup, both photographically and personally.

The keynote speakers were Freeman Patterson and David duChemin, both fantastic presenters, photographers and all around awesome people.  Although I got a lot out of each of their presentations there were two salient points that have resonated with me over the past week and a half since returning home.  The first from Freeman’s presentation was during his opening remarks when he said, “It’s not important how we create but that we create.”  We don’t have to produce the next all time best-est image in the history of 500px in order to put a little tick mark in the box next to “be creative” on our daily to do list.  No, it’s just as good to create the to do list in the first place.  Well maybe not quite, but the point is that many of the things we do in our daily lives are creative acts and we should strive to put the same energy and attention into them as we do into making our photographic masterpieces.  Why?  Simple, because it make us better.  It makes us better people and it makes us better photographers and artists.  And if you need another reason, creative people tend to age slower, live longer and are happier on average.

The second big takeaway was from David’s presentation in which he stressed the importance of  “…doing the work.”  Art is hard work and in order to produce the art we have to do the art.  I know it sounds pretty obvious but in reality many of us dance around the work of doing photography.  We plan, visualize, surf the web, watch video tutorials on post processing, etc.  Don’t get me wrong, that’s all important and we need to have the requisite skills and language of photography to fulfill our vision but the art only comes from actually doing the work.  People often ask me how they can improve their photography.  My answer is simple, stop buying gear and software and start taking more photographs.  Most innovative or creative ideas aren’t the manifestations of the “ah ha” moments or epiphanies that drop out of the sky at the critical juncture as portrayed in popular culture and film.  Instead they come from the slow and often tedious act of doing the work, rolling up the sleeves and getting dirty, really mired in your process, whatever that might be.  Many of my best and favorite photographs have come out of just such moments; moments when I’ve let my preconceptions and plans fall by the wayside and really followed the muse.

The accompanying image illustrates my point.  It’s definitely not the image I had hoped for or anticipated making when I set out to shoot a few evenings ago.  We’ve been having some crazy weather the past couple of weeks, lots of thunder storms producing some really dramatic skies.  I had hoped to capture some dramatic weather event at sunset in the nearby mountains but when I arrived things had quieted down considerably.  By letting go and not being blinded by what wasn’t there I allowed myself to be present in the creative process and was able to make an image that has been resonating with me ever since.  It’s not the high energy, dramatic image that I had in mind but it’s one that evokes an emotional response nonetheless.  It’s one of calm, stillness and serenity; feelings I often equate with time spent in the north woods.  So glad I did the work… 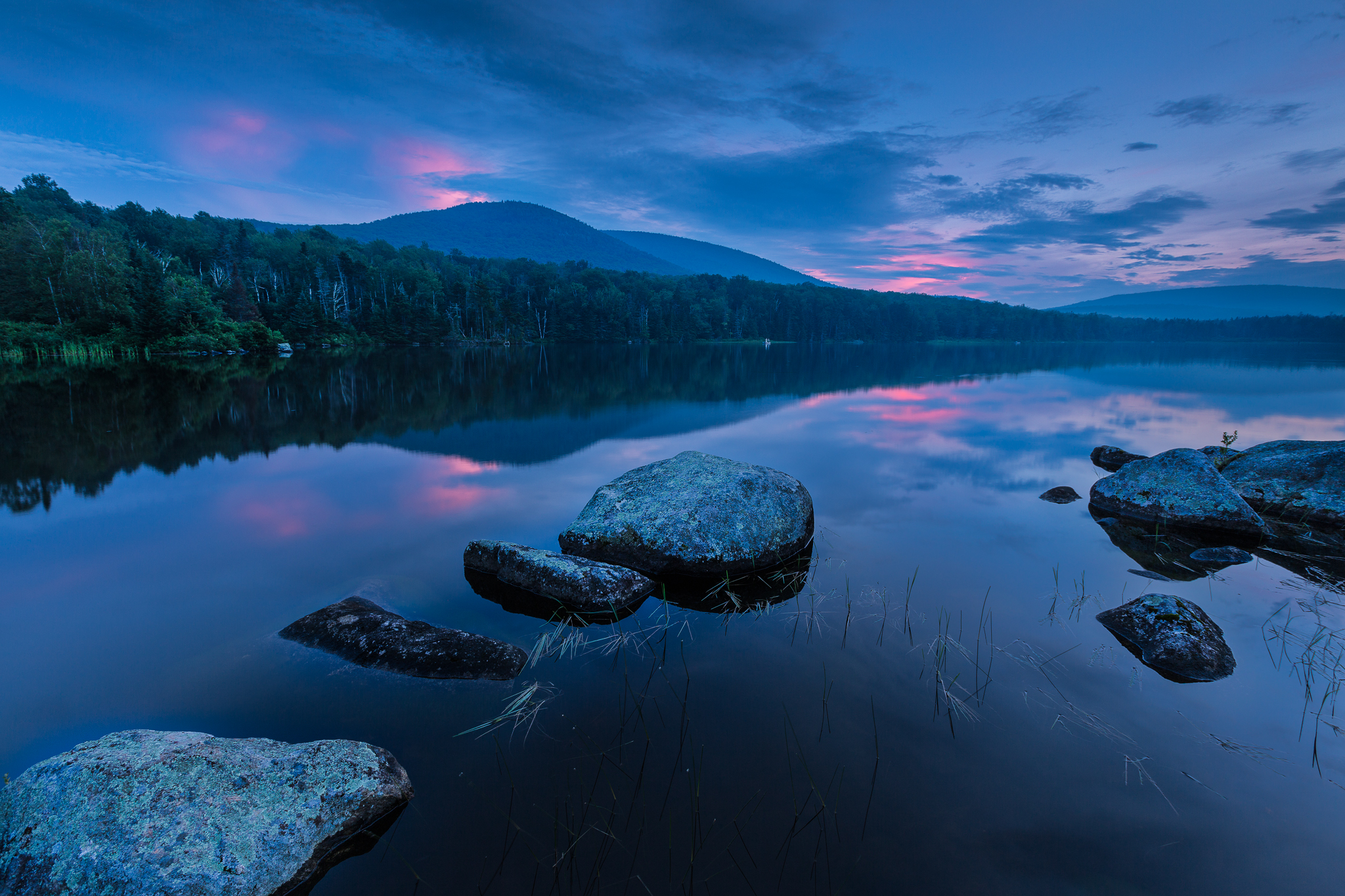