Getting Lucky at the Grand Canyon

No, not like that.  Geesh get your minds out of the gutter!  I mean truly getting lucky with the light and atmospheric conditions when out photographing.  There is a great quote, I think by Arnold Palmer or some other famous golfer about how the longer he practices his craft the luckier he gets.  The message that luck favors the well prepared is totally valid and definitely pays big dividends in landscape photography.  But sometimes you just get lucky, not because you’ve prepared or scouted or sold your soul to the devil but simply because the light gods decide to shine down upon you.

I had such an experience recently on my trip to Arizona.  As I mentioned in my last post this was mostly a family trip with the emphasis being on family, photography would have to take second chair in this orchestra.  We were based in Sedona but made a quick 24-hour jaunt up to the Grand Canyon, or the Grand Candy as my 3-year-old niece and daughters called it.  That meant that I would only have two shots at photographing the canyon during the golden hour.  When we arrived we did the typical touristy stuff like walk the south rim trail, visit Mather Point and some of the other iconic views and mostly just gawked and marveled at the sheer magnitude and awesomeness of this wonder.  During the evening my hopes of getting some low angle light radiating through the canyon were dashed by an incoming cold front and the associated clouds.  However, I was able to make a nice monochrome image before the light completely shut off, but alas no grandeur in the sky or warm sidelight to reveal the wonderful folds and texture within the canyon.

The forecast for the next day was mostly cloudy with 100% chance of showers.  Without another opportunity on the trip to shoot sunrise at the Grand Canyon I decided to set the alarm and schlep out to Yaki Point on the first shuttle bus at 4:30 AM.  As I left the hotel room the sky looked fairly promising and my excitement reached crescendo when I arrived at the shuttle and no one else was waiting to go to Yaki Point.  That meant I’d be the only one out there until at least 5:15 AM.  With a sunrise time of 5:43 AM I could very well enjoy the best color without another photographer around, bonus!  And even if there were no color I’d get to enjoy being on the rim and soak in the view in complete solitude, double bonus!

When I arrived I headed right back to the spot I’d been the previous evening.  I hadn’t scouted anything else and to be honest the thought of scrambling around the rim searching out foreground subjects in near darkness knowing there was a 1000 foot drop to certain death or at best severe mangling was motivation enough to take the easy road.  As luck would have it, just like clockwork 20 minutes before sunrise, the most amazing light began to radiate from a sliver of clear sky at the horizon.  And within a few minutes, blammo!  The color continued to build for several minutes and then faster than it had appeared it shut off like someone flipped a switch.  At that point another shuttle had arrived with a pose of photographers all rushing and scrambling to harvest what was left of an amazing sunrise.  As I packed up my gear and headed back to the shuttle lot I caught myself chuckling, “Damn that was lucky.” 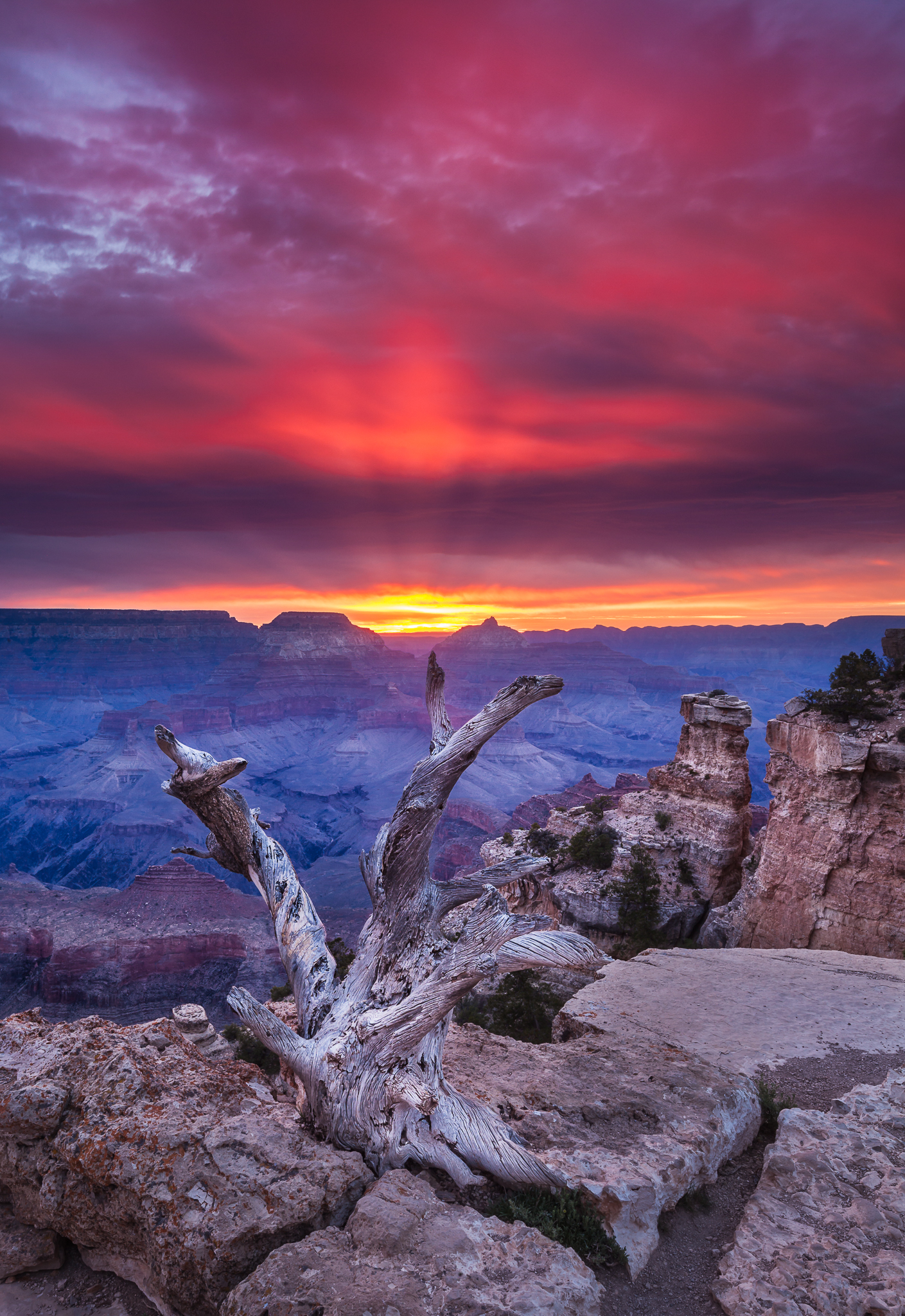