We’ve all heard this advice before in some form or another.  “There’s always something to shoot…” “Never give up…”, “Stay late…”  But every once in a while I get reminded of just how important it is to keep these axioms in the forefront of your mind.  And if you’re dense like me, state them out loud every once in a while so they don’t get lost with all the other voices competing for air time in your head (probably a topic for another post).

Last week I headed out to one of my favorite spots on Lake Champlain in hopes of catching something dramatic as winter storm Nemo made a furious retreat from the northeast.  I was hoping to time dramatic clouds and big waves on the lake with sunset.  But when I arrived it became all too evident that my skies were destined to be clear.  Rather than retreat to the car and later the bar in defeat, I decided to stick things out, braving a very stiff wind and bitter cold temps to do the only logical thing a landscape photographer can do with clear skies at sunset; Suntar!

As you can see from the image, there were some pretty interesting ice formations along the shore to incorporate as foreground subjects and the waves added another interesting and somewhat dynamic element to the scene.  I found a decent composition with a strong foreground and good perspective for a sweet sunstar.  I waited, executed my shot and packed up without ever really feeling like I got what I came for.  It was really easy to make the final call and head for the protection of the car.  After all it was damn cold with wind-chill values easily approaching -20 f or colder.  However, it was too easy…

I remember shouldering my pack and turning toward the trail thinking, “You’re such a loser, stay for the blue hour, it’ll probably be really pretty with all that ice to reflect the twilight…”  I took a few steps toward the parking lot as the self flagellation continued before turning back, actually saying out loud “Don’t give up, there’s more hear to shoot.”  I dropped the pack, dug out my camera, re-attached the filters, set up the frozen tripod, thawed my fingers and began to work the scene again.  This time I cleared my head, became more open to my surroundings, with no preconceived notion of what to shoot and no pressure associated with sunset.

I settled on a few compositions that featured the ice formations and light that reflected from their surface.  And as the twilight continued to build, I became more and more excited at what I was seeing on the back of my lcd.  With a white balance set near daylight the blues reflecting from the ice and water were nothing short of sublime.  I was also enjoying the rushing waves as they carried chunks of ice in and out of the scene.  With my composition set and the light perfect I set my attention on timing some of the larger incoming ice chunks to add an element of dynamism to the image.  Pretty soon I forgot about the cold and got lost in capturing this icy winter landscape.

“I don’t often photograph when it’s 20 below.  But when I do, I usually freeze my ass off.  Stay thirsty my friends.” 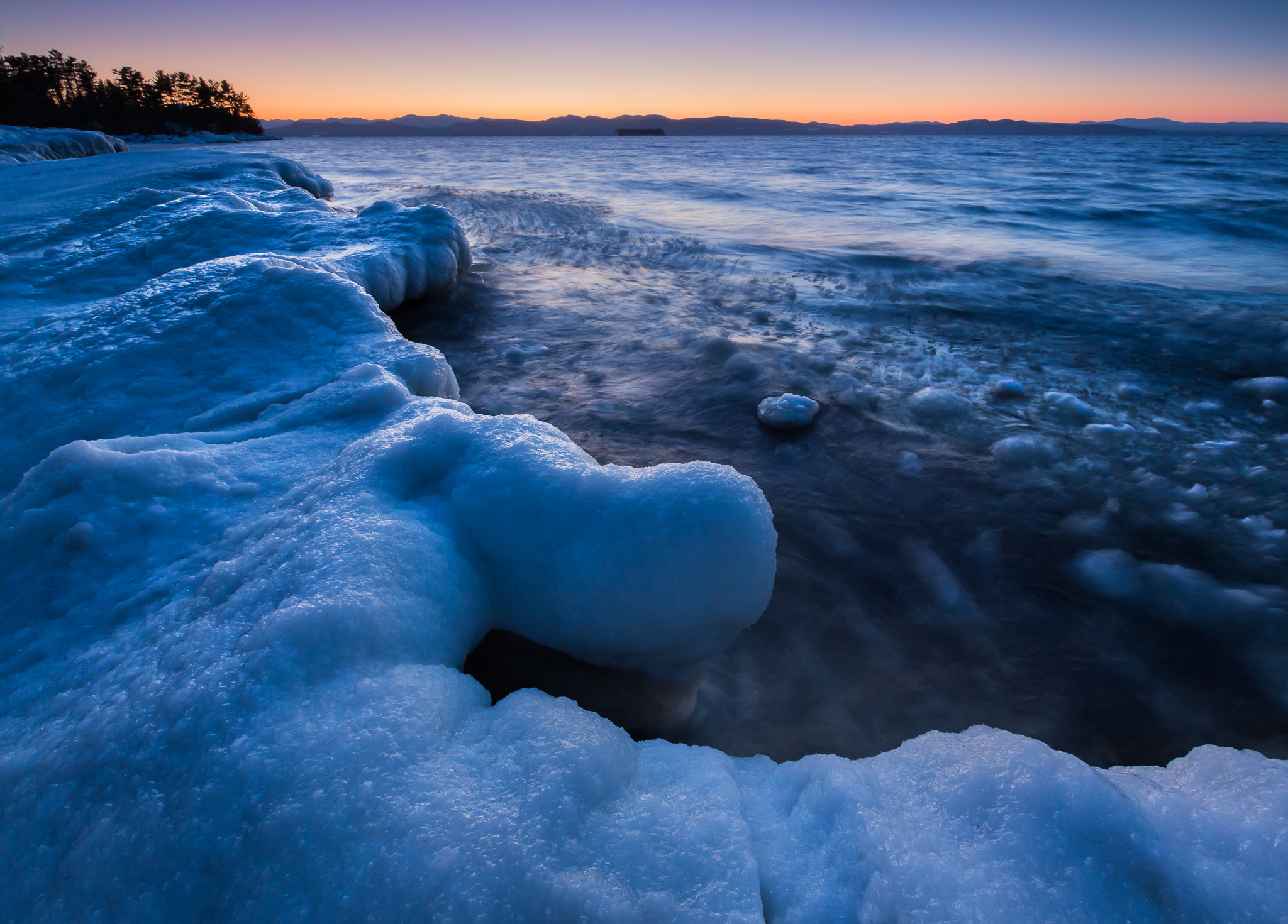