As I alluded to in the first two posts of the series (“Getting Picky” and “Creative Exposure”) our photographic journeys are very much an evolution, everyone on their own path and pace.  Except unlike the slow and steady pace of biological evolution our evolution as photographers is very much like an arc or curve.  We tend to progress/evolve very rapidly at the beginning of the journey, and as such the slope of our curve is very steep.  We master the basic camera functions, stop shooting on Auto, learn about depth of field and start making more pleasing compositions.  But after we reach a certain level of proficiency the slope of our curve begins to flatten and may even level off completely.  It’s at this point I fear many of us plateau.  And if we’re not careful, where we may remain for the duration of our photographic lives.

Searching for and paying attention to the “Decisive Moment” within a scene can be one way to get back on the path of continued photographic development.  Henri Cartier-Bresson is credited with coining the phrase “the decisive moment” and it’s referenced by countless photographers and writers.  I recently read that Cartier-Bresson’s original intent has been miss-interpreted by many.  Rather than describing the peak of action or drama within a scene or story it’s believed that he was referring to the moment in which elements within a scene come to together in the most pleasing or compelling way visually within the frame. Paying attention to the decisive moment is as much a compositional strategy as a story telling one.  It’s not enough to anticipate the height of drama and click the shutter.  You’ve got to find a way to integrate that moment with the other elements in a scene in the most pleasing composition.  A great moment arranged within the frame in a strong, graphic or pleasing way will have much more impact on the viewer than simply a great moment.

The hardest part of finding and successfully capturing the decisive moment is determining what it is we are trying to say in a photograph.  This is where identifying our intent is key.  If you don’t know what is you are trying to say in an image then how on earth can you expect anyone else to know?  Make no mistake your viewers will interpret your image, wouldn’t it be a shame if the message they got wasn’t your intended one?  I’m not suggesting that you need to head out on every shoot with an itinerary and script.  But what I am saying is that when you are evaluating any given scene or subject you ask the questions and consider how and when the decisive moment factors into the equation.  What is my intent?  Can I articulate one phrase that describes my image?  What is the decisive moment for this scene?  Is there a better moment worth waiting for, coming back for?  Is this the best way to arrangement the elements within the frame, or could the composition be stronger?

I made this particular image on a recent trip to Belize (partly why this blog post was so long in the making).  We had hoped to spend 6 days kayaking and photographing the barrier islands off the southern coast.  But weather and shoddy gear from the outfitter lead us to change plans and spend more time on the mainland (more on that later as I’m sure Ian and I will no doubt post several images from the trip in the coming days/weeks).  I had the opportunity to walk by this intimate palmetto hammock on several occasion during our stay in Placencia.  Under soft overcast light this scene would probably not have peeked my curiosity, but about 45 minutes after sunrise with somewhat diffuse backlight the scene came alive.  The first morning I didn’t have my tripod and simply couldn’t muster the depth of field required for the shot and maintain a fast enough shutter speed to handhold so I returned over the course of several mornings to make the image you see here.  The decisive moment and the ultimate intent of the shot came when the backlight illuminated the splayed palmetto fronds creating an otherworldly electric green.  I chose a somewhat wide-angle composition to include the repeating pattern of fanlike palmetto plants seemingly reaching for the light.  I also chose a small aperture to create a bit of sun-star flare to further continue the pattern created by the backlit palmettos.  I’m pleased with the arrangement of elements and feel as though returning several times to capture the decisive moment was the difference between a ho hum image and one with dramatic impact. 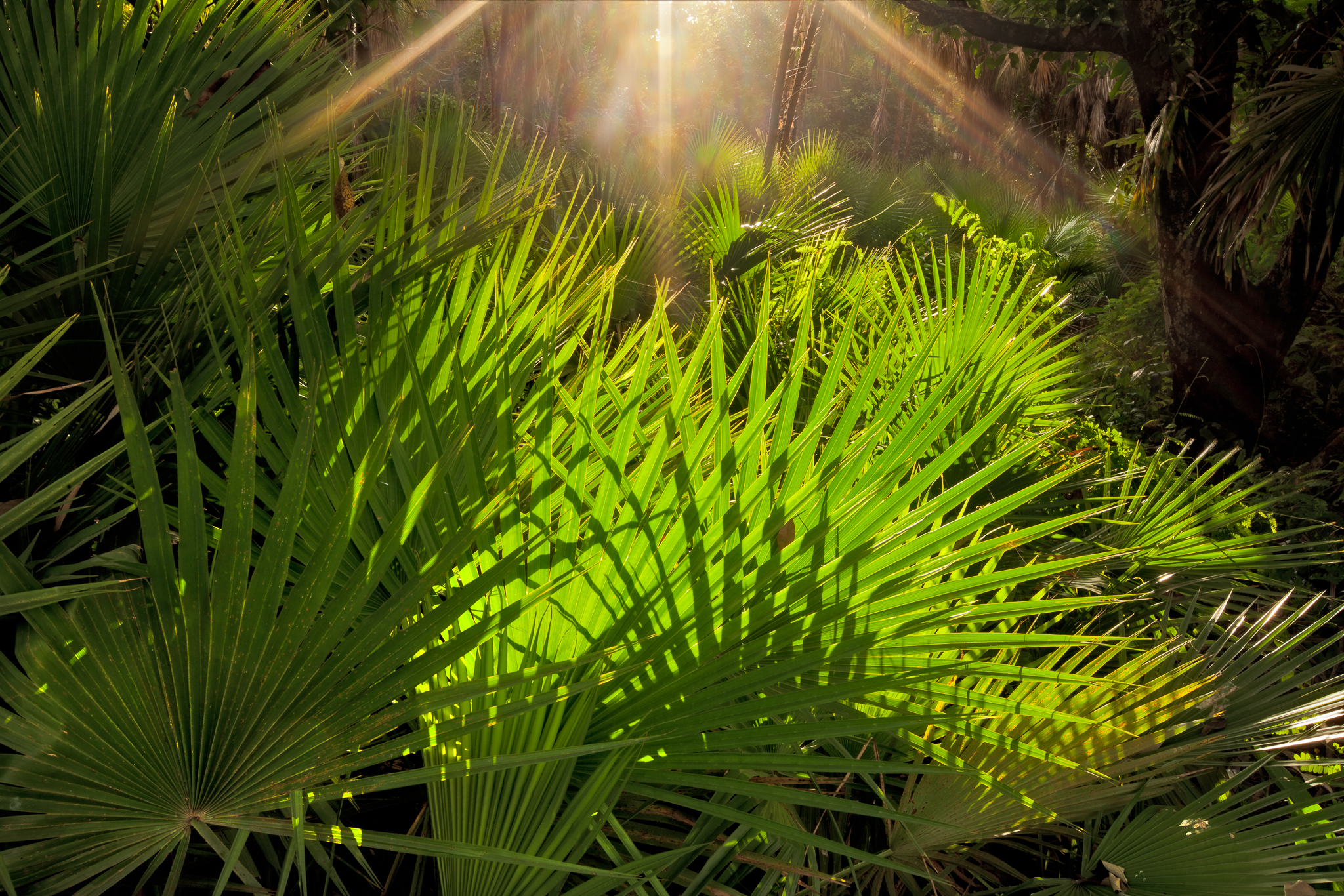